The Bangor Halfway House was established in 1965 by a grass-roots group of people in recovery along with the support of family members and friends. In 1968, the Men’s Halfway House became the first public treatment program for alcoholism in northern Maine. In 1981, the Women’s Halfway House became the first women’s residential program in Maine. As services expanded to include correctional programs, Wellspring, Inc., was established to provide all treatment services while The Bangor Half-Way House, owner of the two residential program buildings, continued as a separate corporation with the mission “…to maintain a home for individuals seeking rehabilitation from alcoholism and other drug abuse” maintaining the residential facilities.

Acknowledging the needs of Wellspring graduates for safe and affordable housing, the Bangor Half-Way House, with the help of a variety of grants made possible by the Maine State Housing Authority, purchased and renovated two apartment buildings. Nine affordable rental units opened in 2004 for graduates of substance abuse treatment programs. Tenants are expected to be in an outpatient or other recovery program and remain alcohol and drug free while transitioning into the community. 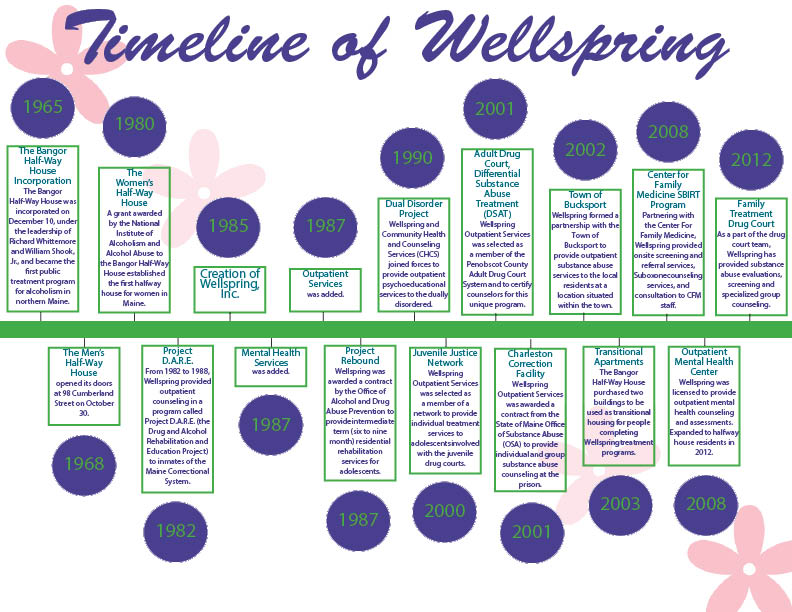 Timeline of The Bangor Halfway House and Wellspring

1968 — The Men’s Halfway House — The Men’s Halfway House opened its doors at 98 Cumberland Street on October 30. Its mission is to help alcoholics regain and maintain sobriety, self-respect and eventually to regain a productive place in the community. The first three years of the program were funded by a federal grant through Vocational Rehabilitation with a small percentage of local funding. Originally the men received room and board while they learned about the issues of alcoholism, supported by the other residents and guided by the staff, which consisted of a house manager and a resident assistant manager. Referral to community resources were provided for general medical, psychiatric and vocational evaluations.

1980 — The Women’s Halfway House — A grant awarded by the National Institute of Alcoholism and Alcohol Abuse to the Bangor Half-Way House established the first halfway house for women in Maine, which opened on February 10, 1981. Programs were then reorganized at both halfway houses to include educational, and vocational classes for the men and women together, along with group therapy and individual counseling sessions.

1982 — Project D.A.R.E. — From 1982 to 1988, Wellspring provided outpatient counseling in a program called Project D.A.R.E. (the Drug and Alcohol Rehabilitation and Education Project) to inmates of the Maine Correctional System at its Thomaston, Warren, Charleston and Bangor Pre-Release facilities under a contract from the Maine State Department of Corrections. In 1988, the contract was terminated when the department hired its own substance abuse counselors. In 2001, at the request of the Office of Substance Abuse, we again provided individual and group counseling to the inmates at Charleston, and Bangor Pre-Release Centers.

1985 — Creation of Wellspring, Inc. — Having presided over the evolution of its program into a highly respected complex of treatment services, the board and its executive director created Wellspring—a private, nonprofit corporation with its own board of directors – to be responsible for all aspects of program services and day-to-day management of the facilities. Since that time, the sole purpose of The Bangor Half-Way House has been the provision and maintenance of the physical plant needs of Wellspring to operate its programs.

1987 — Mental Health Services — A licensed clinical social worker serves as clinical director. A psychiatrist consults to the agency twelve hours a month, monitoring client medications and conducting psychiatric evaluations and follow-ups when indicated. An outpatient counselor specializing in dual diagnoses provides four hours of group counseling each week for those with co-occurring disorders of mental illness and substance abuse in the residential programs.

1987 – Outpatient Services — Wellspring received a contract from the State of Maine Office of Alcohol and Drug Abuse Prevention to provide community-based substance abuse outpatient services for families and individuals in the greater Bangor-Brewer area. The program offers counseling to individuals and families who suffer from or are affected by substance abuse. Along with a sliding scale fee schedule, the United Way of Eastern Maine helps to fund the costs of those who cannot afford treatment.

1987 – Project Rebound — Wellspring was awarded a contract by the Office of Alcohol and Drug Abuse Prevention to provide intermediate term (six to nine month) residential rehabilitation services for adolescents. Project Rebound opened its doors on the campus of University College May 2, 1988, and served adolescent males, ages 14 to 19, offering individualized treatment and an in-house accredited school program. Project Rebound closed April 21, 1995, because of Medicaid reimbursement problems.

1990 — Dual Disorder Project — Wellspring and Community Health and Counseling Services (CHCS) joined forces to provide outpatient psychoeducational services to the dually disordered—those suffering from the combined diseases of substance addiction and mental illness. The dual disorder project was discontinued in 1999.

2000 – Juvenile Justice Network – Wellspring Outpatient Services was selected as a member of a network to provide individual treatment services to adolescents involved with the juvenile drug courts.

2001 – Charleston Correction Facility – Wellspring Outpatient Services was awarded a contract from the State of Maine Office of Substance Abuse (OSA) to provide individual and group substance abuse counseling at the prison.

2002-2005 – Town of Bucksport – Wellspring formed a partnership with the Town of Bucksport to provide outpatient substance abuse services to the local residents at a location situated within the town. Difficulties maintaining part-time staff and funding issues forced closure of this program.

2012 – Family Treatment Drug Court – As a part of the drug court team, Wellspring has provided substance abuse evaluations to all candidates for this program, offering specialized groups for participants, serving on the steering committee, and participating in weekly team meetings.